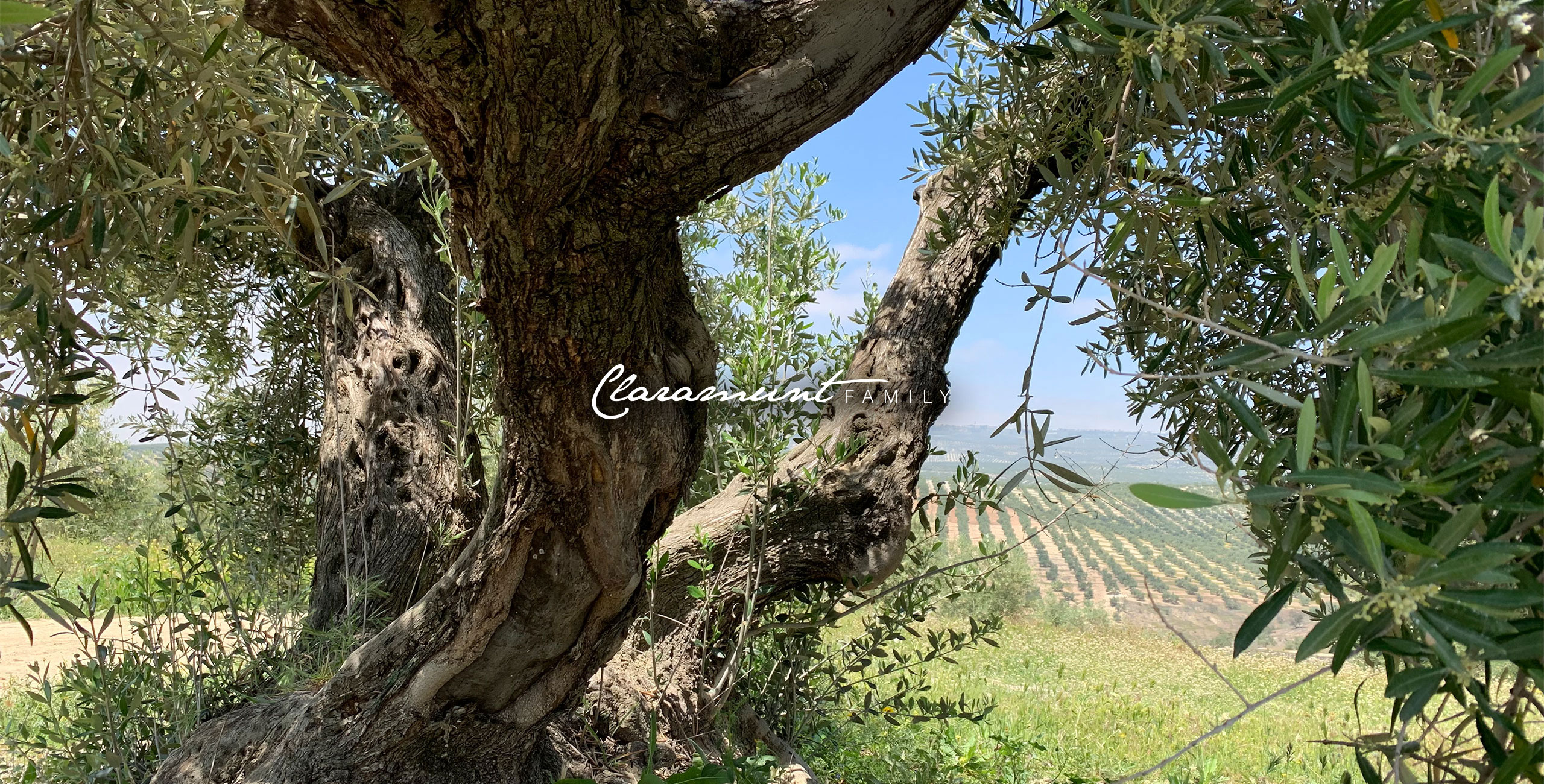 My name is Picual, maybe my name doesn’t remind you anything, or on the contrary, it means a lot; the fact is that there are many olive trees named like me in my region; together with my brothers we have a fact that differentiates us from all others, this fact is our family, the Claramunt family, to which we have belonged for many years and with a tradition of more than two centuries. With this introduction, I would like to tell you my story, our story.

During all these years, my family has always taken care of me and my fruit, Picual olive, the quintessential variety in Spain. When it is ready for its harvest, Claramunt family transform it into the most precious part of me: Olive Oil.

In 1999 two relatives came to our home, the first relative in arrive was Arbequina variety, coming from Catalonia her homeland, and she wanted to settle in our Andalusian land, the invitation was made by Joaquín Claramunt, who was convinced that in Jaen, Arbequina would draw her best character from within; and so it was, it is our most feminine, delicate, sweet and with a certain mischief variety that shows in its touch the most elegant spice.

That same year 1999, also became part of our family, my relative Frantoio variety, came from Italian lands, specifically from Tuscany, austere, hard-working land, …. Joaquin Claramunt took a risk because my relative Frantoio has always had a reputation for being complex, rude, rough, difficult to deal with, but we were surprised because although it is true that he rebelled according to his fame we realized that a gentleman, our polite Italian, had arrived, dynamic… and our family was growing but it was not yet complete.

It would be in 2004 when the Koroneiki variety arrived on our land, the last and risky bet of my farmer, Joaquín Claramunt. Finally, we were all and began our adventure and our dream, the Claramunt Extra Virgin Olive Oil dream.

The life of the Claramunt family is totally focused on this project that I present to you. They feel, they suffer and they laugh with us. They help us grow our fruits as their own children. They take care of us with the best of their intentions, full of passion and harmony, so that our clients can enjoy an EVOO of extraordinary quality.

The different products that you will see throughout this website are the result of a dream, our way of life. The Claramunt family gives the best of their attention to our fruit, their team and, of course, their customers. The clients are the main reason why they are so rigorous at all stages of the production and commercialisation processes.

The entire Claramunt family, together with us, the olive trees, would like to dedicate this dream to our father, Salvador Claramunt, who for only a few months could not see this project come true. ‘We must never forget where we come from, where our roots lie and who established them. We will always be eternally grateful to you’.

My people, our values

Our MISSION as a team is to offer a selection of top-quality Extra Virgin Olive Oils (EVOOs) where its flavor and authenticity provide our customers with exceptional moments.

Likewise, our VISION is that customers, both national and international, recognize our EVOO offer as healthy, authentic and delicious and immediately identify us as a good supplier.

Our fundamental VALUES are based on the promotion of a healthy and varied diet that takes into account the principles of sustainability. In this sense, we promote environmental care and a high sense of social responsibility: we are part of several initiatives and promote others, such as the use of biodegradable tasting glasses, in support of the #Nomoreplastic global movement which aims to raise awareness of the negative effects of plastic to use and throw away.

Our principal dreamer and leader, he studied Agricultural Engineering at the University of Cordoba and Master degree in olive oil tasting. has more than 25 years of experience in the agri-food sector, and specifically, in the olive-oil world. Elaiologist. Visible head in all national events, great communicator, affable and with great ability to adapt to all changes.

His passion is to share a good wine with his friends at home.

Graduated in Law from the University of Jaen, she has been linked to the Claramunt family for more than 10 years. She is in charge of all the administrative-legal responsibility of the firm.

With her charismatic attitude, she always brings the group together.

Her passion is her four children, her first company; she has always loved cooking, reading (especially philosophy) and organizing lovely family parties.

Her commitment and dedication are a pillar for the development of our activity.

She is passionate about traveling, reading, meeting people and sharing her time with friends. She is curious, restless, very familiar and fun.

Yazmin is our Export Manager. Master degree in International Business with 15 years of experience in the exports of Olive Oil, her mission is to spread the knowledge of Claramunt Oils around the world.

As a person she is open, tireless, dynamic, passionate about learning new cultures.

Responsible of packaging and warehouse

For a long time, Satu worked in the agricultural department, in the countryside; although since 2019 he is in charge of the packing and takes care that our oil reaches our customers in perfect conditions.

Satu spends his free time among us caring for our environment, the nests of partridges, his great passion the countryside.

Responsible for the field

Seba works in our field. He is in charge of the human team that throughout the campaign, takes care and watches that our olive trees are in perfect condition.

Seba, like Satu, loves the countryside, taking care of her animals and enjoying herself with her family and friends in good time. His great passion, his wife Manoli and his beautiful daughter Antonia.

The cradle on which Claramunt’s Extra Virgin Olive Oil flourishes could only have world-class status. Baeza, monumental and olive grove, World Heritage for its historic buildings, emblems of Jaen and Andalusia. Inhabited from the Bronze Age to our times, it has a historical and cultural heritage that has made it an international tourist attraction.

And from the Baeza hills, our olive trees, under the sun of beautiful sunrises and calm sunsets, become protagonists of the eternal cycle in which Claramunt, the most exquisite of oils, blooms.

Discover Baeza and the province of Jaen as you have never done before. Let us show you the pampering we make our oil, the processes we follow, the ins and outs of our olive grove and taste the Claramunt extra virgin olive oil in its cradle.

More information
Gestionar el consentimiento de las cookies
We use our own and third-party cookies to improve our services and show you advertising related to your preferences by analyzing your browsing habits.
Manage options Manage services Manage vendors Read more about these purposes
View preferences
{title} {title} {title}